It’s hard to beat summertime in Nova Scotia, especially when you’re coming from Florida, where the forecast for the foreseeable future is 90 degrees with 100% humidity. In any case, Nova Scotia turned out to be downright scenic, and this girl ended up spending a week there with her family (don’t worry, we all made it out alive.) There’s so much beauty and things to do, but read on for my top 10 activities in Nova Scotia!

1 | Sail through the Atlantic

We stumbled upon our sailing experience accidentally, but I’d a million percent recommend actually planning it into your schedule. There are plenty of sailing tours from Halifax that you can book in advance, or you can just show up in Lunenburg the day off and book directly on the dock.

A word of warning though – even in the middle of July (during a so-called Canadian heatwave), it’s ridiculously cold on the water for all non-residents of Canada. Bring a sweatshirt (or a parka) and wear some pants! The Canadians thought it was funny how cold we thought it was, but I was not amused. The good news was we had stocked up on hot chocolate in advance and definitely took advantage when we got back to the house!

Let’s be real…you had to know something wine-related was going to be in my top 10 activities in Nova Scotia, right? Nova Scotia wine is relatively new, but they’re killing it with the bubbly! We spent the day touring the Valley with Nova Scotia Wine Tours. You’re going to want to jot that name down…they made the experience so easy! We didn’t have to drive, and they had the wine tastings and cheese plates all set up for us!

Our first stop was L’Acadie Vineyards, an organic winery in Gaspereau Valley. They make fantastic sparkling wine, and make sure you try all of their samples! I don’t know if it was the Canadian heat wave or what, but the cold wine was extra tasty! Fun fact we learned there: in a bottle of champagne, there’s about 56 million champagne bubbles!!

Stop number two was Benjamin Bridges, home to the famous Nova 7 wine. Haven’t heard of Nova 7? Don’t worry, I hadn’t either, but every Canadian on the bus had! It’s definitely worth a taste!

Our last stop was Planters Ridge Winery. Not only do they have gorgeous views, but they have the coolest wine cellar filled to the brim with barrels. While you’re there, make sure to try their unique rummed cider… it’s quite potent! My favorite there was a sparkling rosé called Infatuation. Not only are the bottles beautiful, but the wine itself was downright delicious!

Peggy’s Cove has blown up as a tourist attraction in recent years, which for a town of less than 50 year-round residents, is a pretty impressive feat. You’re going to want to arrive early to beat the tour buses and get the best views of the lighthouse; this way you can avoid lots of other people with selfie-sticks in your background. However, if you don’t have a car and are based on Halifax, it’s super easy to hop on this Peggy’s Cove tour. It’s definitely one of the top 10 activities in Nova Scotia.

The lighthouse is definitely the draw, but make sure you wander out on the rocks. Be careful—the waves do come up pretty high and make everything slippery! We ended up parking our butts about a 15 minute walk from the lighthouse and just watching the ocean.  If I ever become rich and need a summer house, I decided it’ll be in a place like that!

The Bay of Fundy has some serious tide changes, like 28 FEET the day I went…and it all moves in only 6 hours. It’s an absolutely ridiculous phenomenon to watch. There’s plenty of places to watch the tide change, but one of the most beautiful is Baxter’s Harbour. Not only do you get to watch the tide drop, but there’s a gorgeous waterfall too!

5 | Explore the town of Mahone Bay

Oh Mahone Bay, I love you. It’s such a quaint little Nova Scotia town, with all the little shops and restaurants a girl could wish for. Lunenburg is typically a bigger draw (read: more tourists), but Mahone Bay ended up being one of my favorite little spots. If you’re staying in Halifax and aren’t in the mood to drive, you can easily do a Lunenburg and Mahone Bay day trip.

If you’re going all the way to Nova Scotia, you might as well spend a day in Halifax. For nice, sunny days, consider exploring the city via Harbour Hopper or taking a kayak tour. For not-so-nice (read: cold and rainy) days, head to the Maritime Museum.  They have some really cool exhibits on the Halifax Explosion and the Titanic. It’s right along the waterfront, so set aside some time to explore the boardwalk; it’s home to tons of delish restaurants and bars!

Next up on your list of top 10 activities in Nova Scotia is a gimme: hiking! This one is kind of obvious, since Nova Scotia is known for its natural beauty. One of my favorite hikes was in Polly’s Cove (just outside of Peggy’s Cove.) After spending the morning battling other tourists, it was lovely to escape to a bit of peace and calm (and fog, that darn fog followed us, I swear!)

Wherever I am, I’m such a sucker for sunsets. This one was from the deck of the house we rented in Deep Cove. The colors that night were so magical – the mosquitos can be a nightmare, but suck it up, buy some bug spray, and feast your eyes on the sky!

We ended up here somewhat on a whim, and to be honest, I’m not sure why it’s not in every guide book. After breezing through Lunenburg in all of 20 minutes, we cruised over the Blue Rocks Harbour. It’s a really small area, with about 2 buildings, but it has beautiful views.

Carve out some time to read your book with the sea breeze blowing through your hair, and of course, save some time for an ice cream cone! If you have some extra time, it looked like you could rent some kayaks, and it’s the perfect place for a picnic!

Alright, so it doesn’t HAVE to be lobster rolls, but you need to nosh on some kind of fresh seafood (that’s not fried.) I’ll admit, it was occasionally difficult to find fish that wasn’t beer battered and dunked in a fryer, but it was oh so worth it. My all-time favorite was an evening special at the Rope Loft in Chester: haddock stuffed with crab meat drizzled with the most scrumptious sauce. It was absolute heaven. So take my recommendation seriously and try all the seafood you can handle!

How to get to Nova Scotia: I’d recommend searching through CheapOair for cheap flights into Halifax. They scan tons of different travel discount sites and feature special flight deals. From Florida, it’s only a 3.5 hour flight, and gives you a total change of scenery!

Where to Stay in Nova Scotia: Ok, so there’s about a million options on where to stay, but I do have some suggestions for you. After exploring the area, my favorite little towns were Mahone Bay and Lunenburg, so I’d recommend checking out Lunenburg Arms Hotel or Mahone Bay Bed & Breakfast. We personally opted for a VRBO vacation rental about 20 minutes outside of Chester (another amazing little town.) It was gorgeous and provided some peace and quiet, but was a little further from town (aka going out to dinner took some effort.)

How to Get Around: You’re going to want to rent a car to get around. For rental car deals, my go to is Expedia. A little hint: check prices for car rentals outside of the airport—you can save some $$$ that way!

And there you have it, my top 10 activities in Nova Scotia, Canada! Have you been to this Canadian province? What were some of your highlights?

P.S. This post contains affiliate links. If you click on one and make a purchase, I might make a little extra spending money, at no extra cost to you. As always, all opinions are my own. 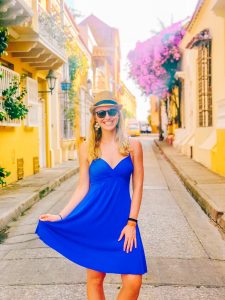